Skip to content
The listing inventory shortage has caught up with us. All year, it has been a wonder that waterfront sales on Lake Wylie have been so strong, while the number of listings has been at record lows. As new properties were introduced to the market, many of them sold within a few days after being listed.
Now, the number of new listings — particularly those priced under $1 million — are so few that sales have slowed significantly. In October, only eight waterfront homes closed — half of the typical number of closings this time of year.
Listings for both waterfront lots and homes are at record lows at the first of November: 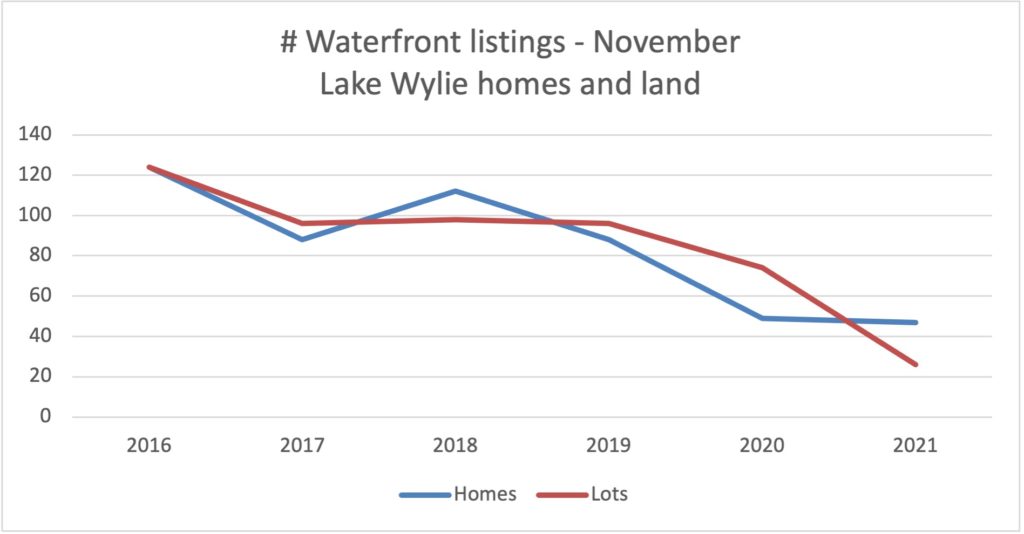 In the graph above, the blue line represents the number of waterfront homes listed on Lake Wylie at the beginning of November each year since 2016, and the red line represents the number of lots listed.
Listings began their steep decline during the first year of the COVID-19 pandemic when many new buyers were attracted to Lake Wylie and the supply of properties could not keep up with the demand. The trend continued into 2021.
Now, of the 47 active waterfront home listings, over half are under contract. There are only 21 fully available, and just 3 of those are priced under a million, with the lowest priced available home at $899,000. Buyers for homes at all price points are waiting in the wings — but particularly for homes priced under $900,000.
Because of the strain on listing inventory, we expect waterfront home sales to fall 5-10% behind last year’s numbers.
Waterfront lot availability is also at its lowest level, with only 26 on the market. The high demand for homes, without sufficient inventory to feed the hungry buyers, led many waterfront buyers to choose to build new homes on the water. Sales in 2021 for waterfront lots are at one of the highest levels ever.
Waterfront prices
Driven by high demand and low supply, waterfront home prices are now averaging just over $930,000, and waterfront lots are averaging in the mid $300’s. The price per square foot for waterfront homes is up 23% over last year and 35% over the year before. Price increases on a few homes that sold in the past three years —then resold in 2021 —confirm that homes in “move-in-ready” condition can fetch significantly higher prices in the current market.
Undeveloped lot prices are varied. There are buyers willing to pay top dollar for premium lots — those in higher end neighborhoods or lots with excellent location and views. Cove lots and those in more remote locations are still selling in the $200’s.
Mortgage rates
Mortgage rates are beginning to inch up again: 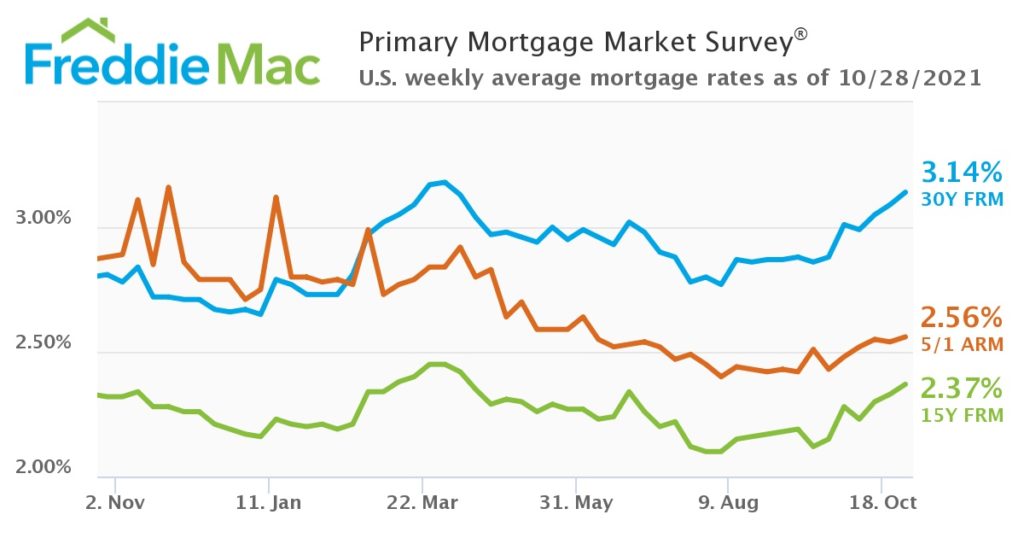 In the graph above, shared by Freddie Mac, the blue line represents 30-year rates, the orange line 5/ ARM rates, and the green line 15 year rates. In the past 12 months, 15Y and 30Y peaked in March, and are now approaching those rates again in early November.
Building material shortages, which became an issue early in the pandemic, are still in play.
We remain very optimistic about the health of the real estate market on Lake Wylie, considering the purchase demand that is still very strong. The short time on the market for new listings, even with higher prices on homes, indicates we are still in a “seller’s market.”
Be sure to check out recent sales on our website: Recent Waterfront Home Sales and Recent Waterfront Lot Sales.
Both buyers and sellers can benefit from the advice of seasoned real estate professionals such as The Lake Wylie Man team. Our knowledge of the market and success in closing hundreds of properties on Lake Wylie are invaluable in this bullish market, and we look forward to serving you throughout the process.